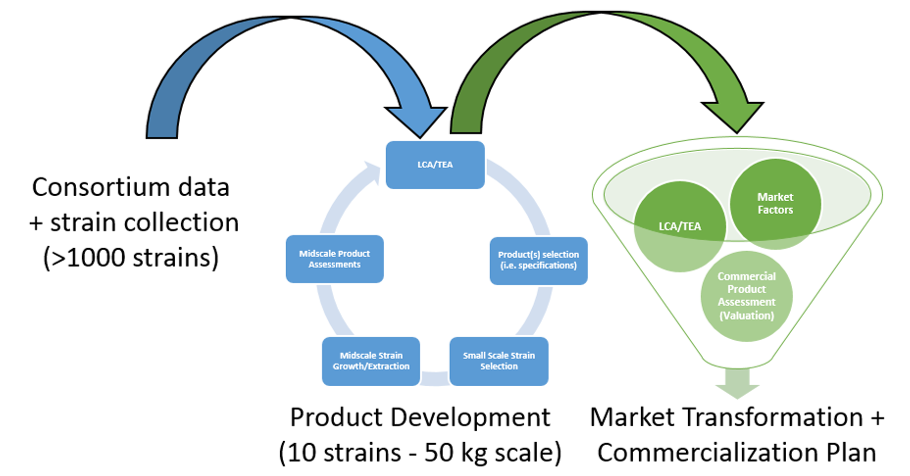 In July 2015, the United States Department of Energy (DOE) awarded $5.2 million in funding to the Marine Algae Industrialization Consortium (MAGIC), led by Duke University in Durham, North Carolina, to research and develop applied technologies that can reduce the cost of biofuels derived from marine microalgae. Interested in the fuel’s market competitiveness, DOE seeks a modeled fuel target price of less than $5 per gallon gasoline equivalent (GGE) by 2019 specifically.

Today, MAGIC has fully begun. But is the challenge doable? “The history of our team prior to MAGIC has given us a realistic starting point,” says MAGIC’s Principal Investigator, Zackary Johnson, Assistant Professor of Molecular Biology at Duke University. “As a result, we intend to build on previous findings to present several field-tested fuel-production pathways that are at once sustainable, economically viable, fit for large-scale commercialization, and inclusive of other environmentally beneficial products.”

It has been known for decades that algal biomass can be converted to advanced biofuels that offer promising alternatives to petroleum-based diesel and jet fuels. But development costs have prevented the biofuel from taking off. Still, in the early 2000s, when the price of oil soared and people began to look for more climate-friendly alternatives to fossil fuels, interest flared bright. Some current MAGIC members became involved in a series of highly successful marine algal biofuel production studies in pilot testing facilities at Cellana in Kona Hawai’i. Economic viability remained a major challenge. However, in 2010, when this earlier team expanded to form the Cornell Marine Algae Biofuels Consortium (Cornell Consortium), newer members began to explore the use of microalgae in animal feeds and human nutrition. Suddenly, new possibilities beyond biofuels emerged. “Now we had these new experimental studies, and what stood out was very exciting,” says MAGIC team member and co-Principal Investigator of the Cornell Consortium Charles Greene, Professor of Earth and Atmospheric Sciences at Cornell University, New York. “We asked ourselves, if we could co-produce fuels and food at the same time from the same batch of algae, could we overcome the economic challenges that had been holding this field back for decades? We conducted techno-economic modeling studies using our experimental data and discovered that co-production could move us much closer to economic viability.”

In 2015, the Cornell Consortium regrouped under MAGIC to investigate this viability in real life, and the DOE is fully on board with MAGIC’s co-production approach as a means to offset fuel costs. “Previously, the fuel and food studies were done in isolation, all bits and pieces,” Johnson says. “The goal of MAGIC is to bring the components together to assess what an integrated food and fuel system can deliver in the broadest sense. We will determine that what looks promising is so on the ground.”

To conduct its comprehensive testing, MAGIC’s partnership has grown to include twelve institutions and private companies from across the world. Some people select and grow algae, others separate algae into oil and protein, use the fuel or animal food products on the market, or strictly analyze for economic viability. The algae will be grown in mid-scale ponds in North Carolina, and MAGIC has mapped a clear strategy.

First, from the thousands of marine algae strains that exist, each potentially with different oil and protein content, team members will identify a handful of types for a range of co-product possibilities. Secondly, these “winners” will be grown at large scale and the biomass passed to two distinct technologies for separating them into component bioproducts of oil and protein. End products from the most promising pathways will be tested in field trials. Life cycle assessments and economic analyses complete the research loop. “We want to be able to present ten algae/technology co-product combinations that have defined price points, benefits, and sustainability factors. Ideally these serve as guidance for future investors and policy makers,” says Johnson.

MAGIC’s success relies on tight team collaboration and decision-making, with no one taking the algae nor each other for granted. “Marine microalgae always have surprises in store that weave together new twists in our story,” Johnson says. “We know this. We learn from each other. We are excited. We have an opportunity to create something that can change the world.”