The science for biofuel production speeds up with a quick, inexpensive tool. 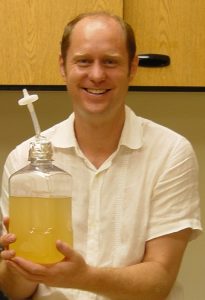 Through our oceans drift tiny microalgae with huge potential for the world. With cells rich in oil, growing fast, they potentially offer a valuable source for biofuels. But, as is true for any other organisms, along with proteins, carbohydrates and nucleic acids, oil (or lipid) represent just one of the four major biochemical components of an algae’s cells. The ratio of these components varies among the thousands of marine microalgae species and strains that exist. Fluctuations in environmental conditions, including light and nutrient availability, impact the ratios further. The lipids themselves vary in sub-type composition for different species and situations. Combine all these factors and you end up with infinite combinations and possibilities. “This is a big problem,” says Zackary Johnson, Assistant Professor of Molecular Biology at Duke University in North Carolina. “To make marine microalgae cultivation for fuel a feasible industry, we need a method to quickly, efficiently, and economically test as many algae species as possible for their lipid content.”

That method may have been found. This spring, the reference journal Handbook of Hydrocarbon and Lipid Microbiology is publishing a study describing it (DOI: 10.1007/978-3-319-31421-1_382-1). The paper was co-authored by Johnson and a diverse group of colleague scientists who are currently collaborating under the umbrella of the Marine Algae Industrialization Consortium (MAGIC), funded by the United States Energy Department precisely to explore biofuel feasibility. MAGIC is led by Duke University and Johnson serves as its principal investigator.

In and of itself, the method is not new. It relies on the Nile Red stain, which happens to be the most widely available and least expensive amid a group of stains that specifically attach themselves to lipids and emit characteristic fluorescence (light) signals. Scientists have been using Nile Red for several decades as a rough tool to quantify and characterize marine microalgae lipids in small-volume samples. “The stains served as one of the first screens,” says Johnson. “The thinking used to be that we could make initial species selections, then apply more expensive, complicated, time-consuming techniques to further determine lipid quality.” But the basic screening skipped across many uncertainties. For example, different light colors, different locations, as well as short time lapses can affect the screening results.  So no one knew for certain how robust the tests’ interpretations were. Since biofuel feasibility field research can require thousands of kilograms of algae, while Nile Red needs as little as two tenths of a gram, the science was well-overdue for a better understanding of Nile Red’s signaling process as well as for methodology improvements. “We had to find out how to best use this simple technique and make it as good as possible,” says Johnson.

The study team set to growing phytoplankton strains representing a range of taxa and species taken from a culture collection at the University of Hawaii. Under a variety of conditions, in three separate laboratories, they sampled the strains for total lipid quantities as well as for the quality of lipid sub-groups. As the data came in, they refined the screening protocol to create an increasingly useful tool.

A whole new group of scientists was called in to conduct detailed comparisons between the Nile Red testing and advanced-technology methods, including chromatography, spectrometry, and solvent extraction processes. They compared nearly a thousand types of algae and conditions, something no one had ever done. Would Nile Red data hold up against the data of the advanced tools? To everyone’s surprise, the answer was yes. Nile Red came through as a more reliable tool than anyone had dared to imagine. “It stood out,” says Johnson. “We now we have confidence on what Nile Red can and cannot tell us.”

The Nile Red protocol has room for improvement, but researchers are already using it actively. A mere dropper full of any algae culture has become sufficient to evaluate cell lipid content reliably, quickly, and economically. “We can now look at thousands of species and their environment to find those combinations that optimize oil production from algae. It speeds up the science,” says Johnson.

The study took the combined effort of biochemists, molecular analysts, and algae specialists across a span of nearly ten years, Before MAGIC, they collaborated under its predecessor, the Cornell Marine Algae Biofuels Consortium. “Our work is a testament to perseverance and ability,” says Johnson. “It is exciting to be part of a team in which diverse fields come together for a common goal that, if it works, can change the world.”