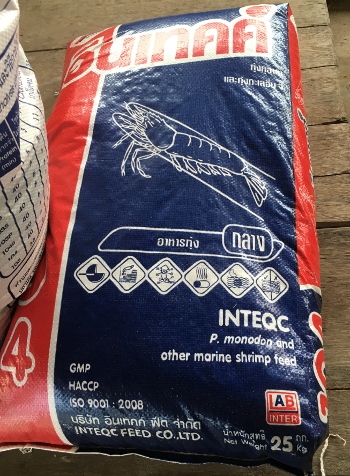 Worldwide, aquaculture is rapidly expanding, and, with it, the need for fish food. But fishmeal, traditionally sourced from marine fisheries, risks depleting the fisheries, comes in limited supplies, and is expensive.  “During the 2010–30 period, prices are expected to rise by 90 percent,” says a December 2013 report by The World Bank, Fish to 2030 (PDF Download).

Fishmeal’s high value is good news for those working to advance commercial-scale biofuel produced from marine microalgae. The algal biomass remaining after oil extraction could deliver a fishmeal substitute that makes algal biofuel as an industry economically competitive, so says a study published March 4, 2016, in the journal Environmental Science & Technology (EST, DOI: 10.1021/acs.est.5b05381).

Microalgae biofuel has been recognized as a promising alternative to petroleum-based diesel and jet fuels. But industrially this solution can only work if the financials work, regardless of other benefits. This has been difficult to show thus far, since the process involves a nascent technology with many unknowns. As a first for science, the EST study integrates key uncertainties, then distills confident predictions that can guide future directions. “Considering these uncertainties, we have never exactly known what works and what doesn’t to make the biofuel cost effective,” says the study’s lead author Léda Gerber Van Doren, who is based in North Carolina, working as a Research Associate for the Marine Algae Industrialization Consortium (MAGIC).  “Does it help to create co-products, for example? We may think so, but how? We needed to find out. The answers tell us where to invest, what kind of projects to focus on.”

Led by Duke University, MAGIC is a group investigating the feasibility of marine algae as biofuel feed stock when combined with co-products. So Gerber analyzed a series of possible scenarios for these. Her variables included productivity levels and financing options. As a baseline for the resulting simulation results, she and her team used data from an existing algae-growing pilot facility in Hawai’i (Cellana, a partner in the MAGIC-affiliated Cornell Consortium), where one hectare of algae (Desmodesmus sp.) delivers about 60 liters of biofuel per day. Secondly, they measured the scenarios against the current US Department of Energy (DOE) research target, which seeks evidence that $5 per gallon gasoline equivalent (GGE) as a minimum price is feasible. “One research pathway analyzed for fuel production alone,” explains Gerber. “A second one looked at fuel paired with algae-based animal feed as the co-product (fuel-and-feed), since animal feed is a well-researched corn and soy substitute. A separate analysis focused on fishmeal as a co-product.” 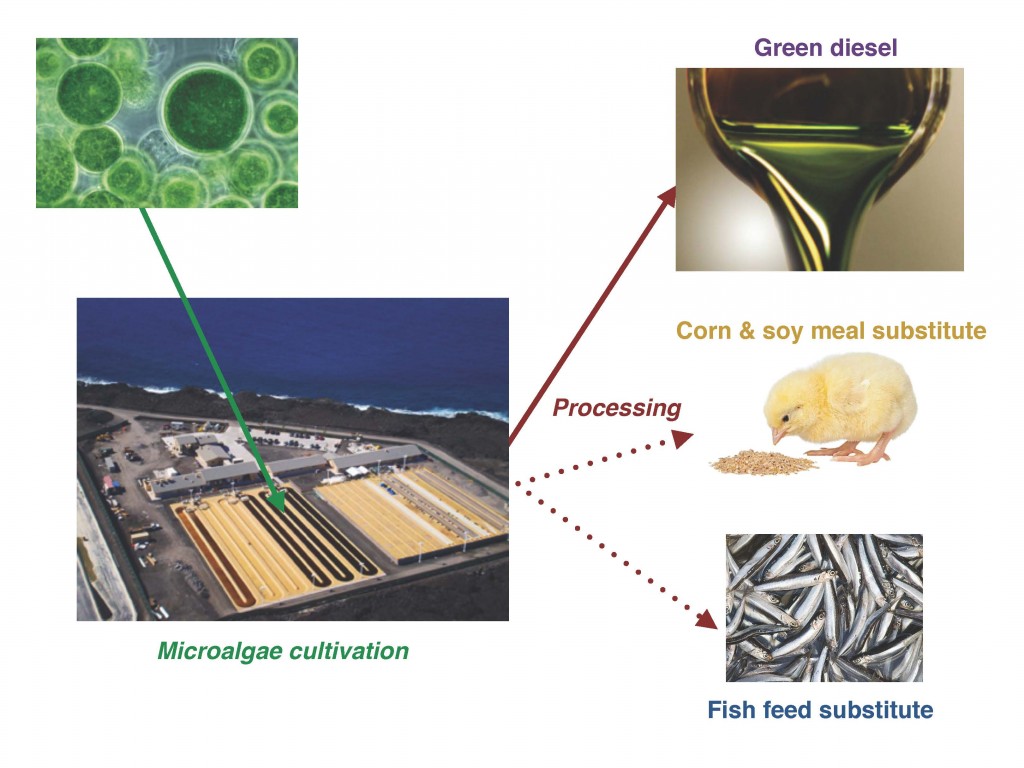 The results? While neither the fuel alone nor the fuel-and-feed pathway meets the DOE target at baseline, fuel-and-feed is more likely to reach or dip below $5 once production doubles. “But that’s a challenge,” Gerber says. Her data show that even with public financing an increase of 70 percent in productivity would be required. It turns out that fishmeal is the ticket: “We didn’t know what to expect,” says Gerber. “So we were excited to find that fishmeal will likely work at baseline, with our current conditions and state of technology. We could do what we already do today and it might work.”

At about 7 million tonnes, aquaculture fishmeal has a much smaller market than animal feed serving swine, cattle and poultry, which comes in at about 1 billion tonnes. But it’s also more than three times as expensive and that makes the difference. “Despite uncertainties, without any public financing, we still found a greater than 50 percent chance that the process is going to be profitable with the way we produce fuels now,” says Gerber. “So it is not about enhancing production or financing. What matters is how much you can sell your co-product for.” In fact, scale up production to 39 g/m2/day, and fishmeal might turn profits without any fuel sales at all.

Ultimately, Gerber thinks, a combination of co-products may work best. And biofuel is about the environment. The fishmeal, for sure, would help save the world’s wild fisheries.